First Things About My Wands

Wiccan Wands by artist Tree; maker of hand crafted wooden wands for use in ceremonial magic, Pagan and Wiccan ritual... see and learn more at my special blog for my darling wand babies at wandsbytree.blogspot.com/‎

About the Wand
First, I must say, do not think of this as a total account of the wand. The following is based upon my personal experience, research, and beliefs. Please do surf around the Net for a variety of sites and articles devoted to the magick wand; and don't neglect your local library as a resource. Use different search terms to get different results (magick, magic). As with all things in modern witchcraft, Wicca and neo-paganism, the gold is what feels best and right to the individual. I feel, however, that we must also look to the tried and tested experience of the past. The truth of current written knowledge of the history and proper use of the wand has been diluted with far too many years of interpretation and untruths to be trusted fully as iron clad fact. We magic users of today must perform our own trial and error tests and trust upon our inner Guidance to find what is right and true about the wand for ourselves.

In crafting the wands that I offer a variety of primitive or ancient methods are used. Each wand is carefully hand crafted from natural materials, though I do use modern adhesives to hold secure stones and decorative accents. They are unique works of art, never duplicated. Very few of my wands are ever perfectly straight, because they aren't forced into shape like a dowel rod; each branch used is allowed to express its own peculiarities and individual personality. My inspiration is taken from a variety of historical and religious references. Most often, wands and talking sticks are made from species of woods held to be sacred by the Celtic Druids and Native American people.
One of the great pleasures of the art of wand making is to let the Self become open to the voices of Nature, entering a trance like state while crafting. At such times guidance from the inner self, or Higher Powers, can move through the artist emotionally, and a wand design can seem to create itself. It is, in fact, a communion with the Divine, and such creative acts are seen by some to be a call to service; such as is the priesthood or nunnery in the Christian faith. As artists, we cannot be certain if creativity calls us to wand making or if wand making calls forth the creative Muse; The answer matters little, for we do the job we are compelled to do with joy.

Many of my hand crafted wands have a magickal core and are accented with helpful stones. The method I generally use is to insert a small hand tool into the end of the wand before embedding the stone. I hollow out a tiny chamber for natural totem animal objects such as herbs, seeds, feathers, fur, bone, tooth, or claw. The "core" object is then sealed inside the wand with a pommel stone or other end cap. The user will never actually see three hairs of a black bear inside a wand they are using, but it will lend its energy non-the-less.
Though some would claim that JKR created the concept of a magickal "core" of a wand, I've personally been adding magick materials to the center of wands, talking sticks, and rattle handles for many years before the birth of Harry Potter. I came upon the concept through Native American anthropology studies of totem uses and medicine bags, and also some ancient magic studies*. I don't use pretend items like "Dragon Scales" or "Griffin Feather"; this is real magick and I use real totem animal items from real world creatures such as bear, fox, wolf, deer -- just as our fore fathers might have in days of old. A wand doesn't need to have anything at all extra inside or on it; in truth any non rotting stick of wood will do, but it can certainly add to the confidence in one's magick making to know the physical presence of a stone or totem helper is near. Deciding upon purchasing a wand with or without a magickal core center is a matter of personal desire.

The Art of Wandmaking -- How I Make Hand Carved Wooden Wands; Do's & Don'ts 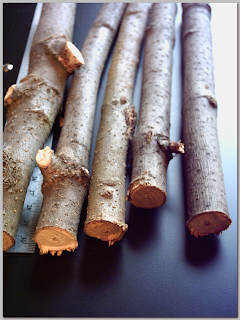 Each wand, and talking stick, is as individual as the trees that grow from the Earth. No two can ever be the same in color, grain, or Spirit, when the individual character is allowed to emerge.

I Don't....- craft altar tools when in a negative mood... ever!
- make wands of copper pipes or pre-fabricated tubes, or dowel rods
- use Fimo or other un-natural type products, other than adhesives
- use machines or turn on a lathe
- mass-produce
- kill or harm trees or animals when harvesting materials, (bacteria and small insects are removed when I sterilize the wood though, and it can't be helped much in this modern day of health concerns)
- take special orders, (as stated in a now pop culture phrase ... "the wand chooses the wizard")
- sell used wands (All of my wands are new and have not been previously used. My husband and myself may wave them about to test balance, heft, and energy, but we feel that testing them out in actual magick practice would open the bonding process with the wand; as if it were our own to keep.)
- use plastic (otherwise known as "the P word" around here!)

I Do....
- make wands of wood with other natural materials
- clean and heat sterilize away bacteria and insects
- follow Spiritual Guidance tempered with knowledge when crafting
- work with all hand tools, some are primitive rocks and stones used as tools
- craft ritual tools during the Constructive phase of the Moon and only in a positive mind set
- make each wand as its own special creation, a unique work of art never duplicated
- use natural materials
- use re-claimed materials; some animal fur may come from vintage or antique clothing, some wand branches may have fallen from the mother tree by wind or rain, rather than having been collected green.
- use environmentally friendly varnish on some creations
- use modern adhesives; my works are inspired by ancient cultures, but are not intended to represent themselves as reproductions, unless otherwise stated in an individual item description, therefore I feel modern adhesives are fine and practical to use.


Visit again for more to come about the wand including ...* What is a magick wand? Uses and History of A Magick Wand
* About Materials of a Ceremonial or Magic Wand

Visit http://artisttreecurios.com to check for currently available wands for your own adoption and use.