Meaning of the Cauldron

ABOUT THE CAULDRON: Meaning of the Cauldron in Myth, Modern Neo-paganism & Wicca. Why does a cauldron have three legs? 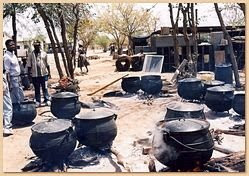 A cauldron or caldron (from Latin caldarium, hot bath) is a large metal pot (kettle) for cooking and/or boiling over an open fire, with a large mouth and usually attached to a hanger with the shape of an arc. Cauldrons have fallen out of use nowadays in the industrialized world as the main cooking vessels they once were. The cauldron is special in many forms of society. A photograph with this article (1) shows preparations for matriculation day at a school in Botswana. Food is usually prepared in the school kitchens, but for a feast, special outdoor cauldron pots are pressed into service. Cauldrons became associated with witchcraft, as a cliché popularized by various fictions, including the play Macbeth. In such fantastic fiction, witches often prepare their potions in a cauldron. Also, in legend, a cauldron is purported to be where leprechauns keep their treasure. Taliesin, the founder of bard craft, was said to be born of the Celtic Goddess, Cerridwen, who had a supernatural magic cauldron. Taliesin consumed a potion from Her sacred cauldron, thus gaining the creativity and inspiration to birth the idea of bard song. In Neo-paganism and Wicca the cauldron is a tool of great importance. Used by both modern witches in folk magic and those of the Wiccan faith for cooking herbal remedies, burning spell papers and ingredients, or used as a ritual vessel during ceremony to hold salt or water. A cauldron can be made of most any material, but cast iron and copper are the most common. For practical uses a metal cauldron provides the safest container for cooking and burning, especially since they usually hang or sit on three legs allowing good air flow. Cauldron shaped pots or kettles of other materials such as stoneware and glass can be spiritually cleansed and re-claimed as ritual or ceremonial tools too. They make wonderful candle holders, scrying bowls for divination, and are much better for holding liquids and salt because those substances can damage metal. It requires each of the elements to create a metal cauldron. Such a cauldron could be seen as a symbol of the four elements; earth, air fire, water combined in both function and form.

Beside being a practical tool, the cauldron is a spiritual symbol to many. Traditionally the witches' cauldron has three legs no matter what the material it's making. This is seen to be in reference to the Goddess in Her Triple Goddess aspect of Maiden, Mother, and Crone. It could also represent three main stages of life; as in birth, life and then of course death. The symbolic meaning of the cauldron is typically seen to be the Mother Goddess. The plump shape mocks the womb of the Earth; Mother Nature. Because we come from a womb when we are born and are, in most cases, placed in the earth when we die the cauldron is also a symbol of rebirth. The afterlife for ancient Celtic people, and many in Wicca today, is known as "The Cauldron of Rebirth" (Tír na nÓg, Tir na nog or the Land of the Ever-Young). The belief is that those who die pass into the Cauldron of Rebirth before being reincarnated. It's easy to understand this transmutation when we consider the observation that ingredients going into a cooking pot are generally dead plant and animal portions. After being cooked, the resulting substance gives life supporting energy for the human body.Ironic in this modern era, the association of food with the cauldron is found in a masculine rather than feminine example. The Dagda, who's name means, "The Good God", was the High King (Father of the Gods) of the Tuatha Dé Danann, the supernatural beings who inhabited Ireland prior to the coming of the Celts. The Dagda had a magic cauldron known for great abundance. The cauldron was bottomless, capable of feeding an army; no one would go hungry in its presence. As the Cauldron of Rebirth it appears in the story of 'Branwen, Daughter of Llyr' and is used by the Irish to resurrect their own dead soldiers; they arise to fight the next day but they cannot speak. Being mute perhaps prevented them from telling the secret mysteries of the Underworld. As a Halloween decoration or sacred ritual tool, the cauldron remains nearly as relevant today as it has through time.


* Meaning of the Cauldron in Myth, Modern Neo-paganism & Wicca "About the Cauldron", 2007 by Tree Pruitt.