The following was already reported by myself in a brief call to Coast to Coast Am with George Noory near the time of the sighting, and I later did a full interview with Linda Moulton Howe on what I witnessed, which is available only through her own site Earthfiles. 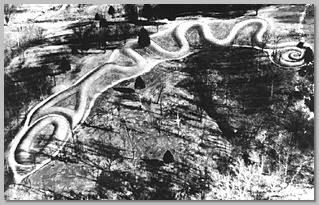 I was born near The Great Serpent Mound State Memorial and live in the general area today. One year while visiting family, my husband and myself noticed mysterious lights in the sky coming from the direction of the Mound.

I feel like I've been asked by (???) the Universal to bring a topic back to light for some reason. I feel guided to bring this up for someone, but who I cannot know. Because I also felt strong guidance to create this site in the first place for sharing, well then, it stands to reason that I must share my thoughts on a topic that makes me oddly uncomfortable. What's making me nervous, in part, is the heavy synchronicity. I'd been thinking about a drawing I'd not given to either Linda Moulton Howe or Jeff Wilson a couple of years ago. (see below for case details). Life had suddenly become the needed focus of my attention at that time so I simply could not do what they asked. On this night, in 2008, I find that I can't get my mind off of the subject of the 2003 Ohio Crop Circle lights.

First, let me explain the synchronicity. The television, generally turned towards ghostly topics if on at all, tossed out at me this eve the discussion of the Crop Circle again. I did some googling, being curious at last of any further details on the case in which I was personally involved. I read some things that gave me a powerful feeling I sometimes get in the palm of my hand and interpret as a "warning" sensation. I sensed there was some sort of creepy importance in what I was reading, and at the same moment the television program in the background used aloud the same words my eyes were reading on the computer screen! That's synchronicity folks. These sort of things happen to me more now than ever before, that such synchronicity seems to convey direct messages.

The sort of synchronicity I'm talking about cannot be denied. I can try to avoid it when a "message" topic starts to rear up, but just like 11:11 or that movie "23" it will be everywhere; TV, radio, a conversation snippet from a passerby, a newspaper ad. Each time I have relinquished doubt and looked into a subject that was being presented, I always find personal truth or some sort of enlightenment without much effort; in that I'm not trying to convince myself or look for eggs from a chicken, so to say. The point is that I feel very strongly that this communication through synchronicity is valid, no matter what the source. So one could say that I was called back to the topic of crop circles.

Back in 2005, strong synchronicity led me to talk with Linda Moulton Howe about my own eye-witnesses account of lights not far from the famous Great Serpent Mound effigy in Ohio. I hadn't realized there would be a serious interest in what we saw that night until during recording I heard Linda say "For the first time on the record....", and that had some weight to it. :) In 2003 no one seemed interested locally, so I didn't take action, (didn't know about the Independent Crop Circle Researchers Association right here in river city). The main attitude was "so what" or at most a mildly interested "hmmm". There was only a micro mention on the evening news in Cincinnati, but thankfully my sister, living somewhat near Serpent Mound, happened to save her local newspaper. It had a small article and an overhead photograph of the crop circle design. My husband and myself had recently moved back to Ohio from an area of Washington State that had mysterious moving lights in the sky nearly all of the time, so though these lights were different, the subject was rather common place for us. We're rarely surprised at the unexplained in this household, and when unexplainable things happen frequently it becomes hard to tell just what is a "unique experience".

If my local news had mentioned the Independent Crop Circle Researchers Association I certainly would have contacted Jeff Wison the next day. But life has a habit of needing to be lived, so I archived the newspaper and moved on. It wasn't until two years later that an airing of Coast to Coast AM with George Noory resurfaced the topic. I called in, got on the air right away, but George seemed disinterested. Maybe I sounded too kooky, maybe he was distracted at the time, I don't know. I'd recently gotten a first computer so decided to look up Earth Files. Linda was certainly interested. You'll have to be a member of her site to read the details of what I wrote for Linda, but here's her introduction from earthfiles.com:

“May 9, 2005 Batavia, Ohio - Two years ago, between August and November 2003, four crop formations in soybeans were reported in the mysterious and ancient mound builder's region of southern Ohio. Most important in terms of plant and soil anomalies was the first one discovered on the morning of August 24, 2003, not far from the famous Serpent Mound near Locust Grove, Ohio. The tall soybean plants had been laid down in a geometry based around the Vesica Pisces symbol found so often in British crop formations. Its longest length was 271 feet and there were no tracks around the entire perimeter or inside the extraordinary pattern.

Jeff Wilson, Director of the Independent Crop Circle Researchers Association based in Cincinnati, Ohio, said that soybean crop formations are very rare in the United States and of the 100 American crop formations he had personally investigated by August 2003, "the Serpent Mound pattern is one of the most sophisticated geometries that we've seen." All the electronic testing Jeff and his colleagues did and studies of plant samples have shown statistically significant anomalies. Further, Jeff pointed out that soybeans are "a tough crop to make your way through. It's a vine-like plant, so when you wade through the stuff, you almost have to rip your way through the plants."

When I'd gotten home from that birthday party the night the circle and light show happened, I scribbled out a little drawing, tracing in my mind's eye the pattern the lights made, onto paper. This drawing is previously unpublished and bears a near identical design as the actual crop circle from 2003. Understand that I had not yet seen the crop circle, only the motions of the spheres of light.

*Sketch based upon the movements of mysterious lights in the sky. Notice the pencil shading in the eye like area and how it corresponds to the positive and negative spacing in the actual crop circle pattern shown below.

*Diagram of the crop circle.

I feel like a sceptic who wants to say "what EVER!" and leave it be, but I've seen too much, and the feeling I got tonight was far too strong to ignore. There's far too much synchronicity all the way around for my personal taste. One of the web pages I was looking at had offered some great images, including the 2003 crop circle in Ohio, scatterdome.com . You'll have to scroll down most of the page there, but it's worth it for the illustrations and photo comparisons. In a nutshell, there was a second crop circle, near another sacred mound in Ohio 2004, and it's creepy how close it is to the first one in 2003; I noticed the similarity right away.

What caused that sensation in my hand I mentioned was reading this passage "Shortly after the crop circle’s discovery, a Dutch crop circle researcher named Bert Janssen discovered that the geometry of the larger circles in the Serpent Mound crop formation matched up perfectly with the larger circles in the Miamisburg formation." Bert Janssen’s name specifically seemed to trigger my "spidey senses" but just what it means I cannot say. I do feel there is something important for someone to look into. On his website, Bert Janssen discusses this crop circle geometry.

I just don't know what to make of it all. Of course there's plenty of Google fodder out there for the individual to browse. Available evidence is so very wide spread in divided subject matters! If I look into UFOs and crop circles it always leads to what seems like an episode of Stargate mixed with The X-Files. More founded subjects such as geometry, theoretical and quantum physics often lead down that same road. I think, therein, I've discovered the source of my anxiety and discomfort; my heart pounds for the hunt as I think of it now. In part, I fear that I could be consumed by the desire to search, connect, and immerse myself in the dpeth of such subjects. My plate is already far too full, so to those out there who do want the effort I say, look outside the circle and bring what you find back to the center. The answers are likely to be found in more than several places, broken into bits and pieces. Like a monster waiting in a night time closet, this thing is there... and it's huge.

I welcome comments and will do my best to respond to questions as soon as possible.