My Tibetan Dogs Offering to Buddha 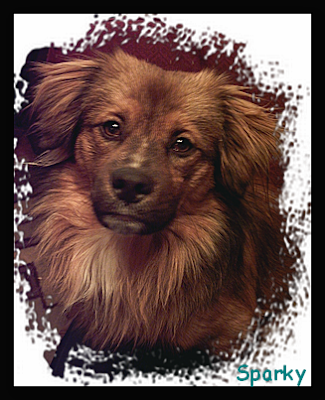 My new dog, Sparky, recently showed a surprising act of spirituality and, what seemed to be charity. Sparky is a Tibetan Spaniel mix we believe is a "Tibalier" and looks like a little Shi-Shi lion or Fu-dog, just like those found on top of incense burners and guardian statues in the ancient orient. The Tibalier is created by crossing the purebred Tibetan Spaniel with the purebred Cavalier King Charles Spaniel. It is considered a hybrid dog, meaning it is not purebred, however the lineage is known. Where as the term mutt is used when a dog has an unknown lineage. We're not certain of his age, because he's a rescued dog, but he's still fairly young. This dog has shown incredible intelligence and has learned most basic commands very quickly; even learning to fetch dropped tools or pens for me.


This morning I was re-arranging the bedroom and had set our beloved thin bodied meditating Buddha statue on the bed. It's a rather large statue, so the posture makes the lap a great place to set offerings and the like. Little Sparky put his front paws on the bed and stood there with a questioning facial expression; almost as if he were listening to something. Upon seeing the statue on the bed, Sparky suddenly left the room in a jog. He quickly returned with his favorite plastic bone. Then he jumped onto the bed and carefully set that toy onto the Buddha lap! Using his nose, he nudged the toy into place. He even took care not to bump the copper Yantra that always rests there. A yantra is a geometrical diagram representing the universe. It's used in Hindu worship and meditation; similar to a mandala.

We don't often set new items onto that Buddha statue, so Sparky could not have been imitating a repetitious action he'd seen us perform. Our little boy simply seemed compelled to make an offering! We feel certain that Spirit does indeed dwell within that statue, and are even more blessed by the presence of Lord Buddha than before. Of course, Sparky could have just thought the skinny guy looked hungry! What a special experience to have witnessed!

The image of Buddha, at the right, is special photomanipulation art I created from a digital photograph of our statue.
Share