Beltane, one of the eight Solar Sabbats in Wicca. Beltane is an ancient Celtic Gaelic holiday adopted readily by modern witches, Wiccans, and other Neo-Pagan groups. Like Samhain, it's opposite on the calendar, May Day eve is a time when the veils between the worlds is thin and the Otherworld close at hand. Some of the reasons for celebrating the holiday are... union of the youthful God and Goddess, beginning of the summer season, bonfire celebration, purification, transition, fertility of animals and harvest, house blessing, petition for protection from ghosts and mischievous Otherworldly Beings such as gnomes and fairies

*Conjure This:
Try crafting a Beltane Spirit Amulet to protect and bless your house. Using equal sized twigs of either rowan or ash wood create an equal-armed cross in the manner often known as a "Gods-Eye"; Both types of wood can be used as protection from negative ghosts or spirits and ash has the added benefit of being thought to repel lightning strikes. Weave ribbon or yarn to hold the twigs together, using colors corresponding to your desires; 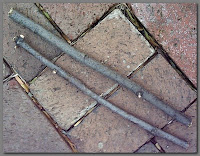 Tie a loop for hanging at the top point of the Four Quarters and place over the doorway or on the entrance to your home. A small pouch of herbs and stones (Medicine Bag) can be secured to the center for added charm. If possible, use all natural materials so that next year the amulet can be tossed into a bonfire; make a new amulet each year.

Have you heard about NASA footage from the early 1990's of a beam of light coming from our planet and like shooting at a craft of some sort? The recorded footage didn't come out for me to see until a few years ago, and of course the NASA response was reflection and shuttle debris. That explanation makes me a bit angry because it's a total lie. I was watching NASA live on television when the original event happened, and it was a battle!

I'd been painting a mural on the wall and had left the television going. One of my cable access channels frequently showed live footage beamed down from the NASA Space Shuttle, and I thought this was very cool of them to do. I think it was part of some sort of public relations effort to get people interested in the Space Program again. The scene was being filmed from a window with the perspective of the Earth being only a half circle on the left, if I remember correctly. I turned from the wall for a break and stood in front of the TV to stretch. I was stunned to see there was a bright craft with a triangle shape moving around above our outer atmosphere! It made motion random debris will not; it was clearly a ship or craft of some sort. Suddenly from the left of the screen came streaking in a flash of light past the Space Shuttle window. When it reached the triangle ships perspective I saw it as a narrow winged like craft. It made a hard bank to the right and fired what looked like a series of small lights at the triangle. Making what looked like a 360 the winged thing stayed with the triangle. The triangle ship didn't seem to make any defense other than skilled evasive maneuvers.

Suddenly the triangle must have sped up to a flash of speed because it became a blur moving to the left as a great thick beam of light came up from the Earth. I was giving more attention to the objects than I was the planetary geography that could be seen, so I can't say where it originated. The whole thing happened very fast! Mind you, this was all in black & white so I can only judge by the glow, but that beam hit the winged ship and it vanished -- poof! It's easy to think it was utterly destroyed, but there was no flaming explosion like in the movies; just a big flash of brightness. The triangle moved back into view near the spot where the winged one had been and the television went black; the signal was cut. I rushed for the remote control to check other stations, sure the emergency sirens would begin at any moment. I could hardly believe what I'd seen and was in shock from the implications; did our planet just save one spaceship from another? Was there all out war!?

All of the other television stations were fine. No sirens ever sounded that night, and later no one said a thing about what had happened. The television station no longer broadcast NASA footage. Any one I mentioned it to thought my imagination was over active and that was terribly frustrating. I felt like I was being lied to and was the only one in the world who'd seen this happen. It didn't take long before I decided to shut-up about it. I tucked the memory away and frequently replayed the scene in my mind so I wouldn't forget details of what has to be the most amazing thing a person could see. Then I hoped that some day there would be answers because I was a bit miffed at getting such a scare with no news about it. It added anxiety to general life knowing there was some weird stuff going on in space and some government on this planet obviously knows about it.

When I later began to listen to Art Bell I learned about the Haarp project when he interviewed author Nick Begich about his book, "Angels Don't Play This Haarp" (see below), which is purportedly advanced Tesla technology. This big beam, Haarp, sounded suspiciously like what I'd seen on the television. So I'm not angry any longer, but have become a little complacent. There is something going on above our planet, and though I'm not sure I believe in little green men, there seems to be genuine extraterrestrial life in the universe. I'm certainly open to the possibility that the ships I saw are terrestrial and world governments are duking it out in space; either way someone knows about this and things are being done. I suppose that as long as the outer space stuff doesn't start falling on my head I've nothing to worry about. Seeing what I did didn't destroy my life or my reputation; people thought I was weird already, so no harm no foul right? I just wish I could look up at the sky and only see pretty stars.

Since the time I wrote the above I did a little searching and found some interesting things. I googled the phrase, "NASA footage from the early 1990's of a beam of light", and discovered it was the shuttle Discovery mission STS-48, launched September 12, 1991. It was seen on NASA Select TV, which at the time was downlinked live from each shuttle mission and distributed on cable and satellite TV, according to a message board at David Icke's Official Forums. This is the first time I've looked up anything about the event, and the blurred recordings they write about on this forum read about right to me. It makes me feel better, but knowing that others do know about it doesn't change anything. I'm still left with the background sensation that God may be in heaven but all is not right with the world.