The latest news from the Circle Times mailing list graced my email inbox recently. I was happy to read that Selena Fox of Circle Sanctuary will be the featured guest on "PagansTonight" Internet Radio Wednesday December 2, from 9 - 10 pm Central Standard Time. I've listened to Selena Fox speak online before and have found her to be charming while filled with good information to share. She's very well spoken on a wide variety of spiritual and metaphysical topics, so there's no telling where the conversation may lead! There's a phone number so that you can call into the show to influence the direction things take. :)
LISTEN: http://www.blogtalkradio.com/witchschool
CALL IN: 347-308-8222

Circle Times is the email newsletter from Circle Sanctuary. Longer ago than I care to tell you, I reached out with questions in the then uncharted realm of Wicca, and 'Circle' rallied to the call. So this Pagan organization has my heart in a special way that no religion alone could, and is my inspiration for openly sharing the things I've learned and experienced over the years. They also publish a fantastic magazine that really gives a solitary witch the feel of community connection -- you should check it out!
Goodness to all as we head towards the Solstice!
Share
0 comments

Being a modern Pagan often requires one to be a creative individual because the majority of Pagans and Wiccans are self taught by necessity. It's a big responsibility we undertake willingly for the benefit of our beliefs, but what to do when the family grows and we become responsible for the education of a Pagan child or teen? One can't simply toss down a stack of books saying "Have at it, kid! It's the way I did it". A child doesn't learn the alphabet by singing "ABZFGR" because they need the structure of "ABC" and "123". Especially if you and your spouse are solitary in practise, without the support of a group environment, finding structure can be a real challenge. Take heart, for there is hope from a new book out now that may provide the structured system that many Pagan families lack.

Pagan Degrees for Children is a new book by Shanddaramon, the author of several published books and articles on Paganism. This book describes a system of teaching children concepts about Paganism and good living through three degrees. Each degree is designed for a different age group and children from 5-18 can learn through hands-on learning and exploration. The system is designed to be very flexible to many situations, children, and learning styles because all work is done with a parent or other adults who work individually with the students.

The publishing company, Astor Press, has provided us with a PDF excerpt so that we may preview the contents of the book, or visit the Amazon.com link above for more information. The author seems to provide suggestions for children, especially teens, distracted from lessons or exhibiting a short attention span, and provides positive encouragement. I was pleased to see comparisons with the system of organizations like Boy Scouts and Girl Scouts of America. Being a former Troop Leader and Girl Scout myself, I can avow to the satisfaction kids receive when earning badges and rising through degrees; It works because it's fun to feel successful!

According to his website the author, Shanddaramon, is a brother and ordained minister in the Sacred Order of Living Paganism (S.O.L.P.) - a spiritual order of men and women dedicated to a deep study and practice of Paganism. He teaches classes, lectures and tutors students in Pagan studies; is a Pagan pastoral counselor; teaches and offers Tarot and Rune advising; and is a published author of Pagan books and articles. He is legally recognized in the states of North Carolina and Massachusetts to perform marriages and other sacerdotal duties. Learn more about Shanddaramon and find Pagan related articles he's written at his website.


* Buy both vintage and handmade rituals tools or other Wicca related goods in my Witch Whats shop section. Because I make most of the items myself I am able to customize some products and would be happy to help you find supplies that may be right for your child's Pagan needs. Special wand blanks in natural Ash Wood are available in a variety of sizes to use as is or craft into your own magic! 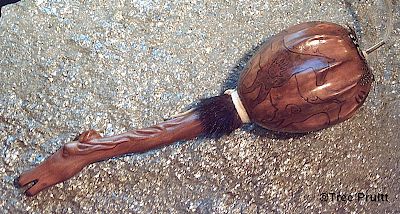 I really enjoy crafting ritual tools, and I only do so in a positive frame of mind. The ritual of setting up and the focus required during crafting is my Esbat, Sabbat, meditation and personal church all together! I also hope to craft something that will be a functional ritual tool as well as attractive home decor so that the new owner may choose to display if desired. I'm told the ceremonial tools I craft have a high pleasing energy, and I've been honored in the past to have several items chosen for a World conference meeting between Native American and Aboriginal Australian tribal elders; similar to a pow-wow gift exchange. Used in ceremonies of self discovery, healing, ghost banishing, and general spell casting, my ritual tools travel all the worlds! So, I'm very pleased to finish a new special rattle created with spirit world travel and journeys in mind.


Here's a unique ritual tool & Native American or Frontier style home decor piece. Wood burned gourd rattle with carved horse head handle is filled with ancient magic symbols! Handmade for personal magic meditation use. "Journey" represents the journey through life as an individual grows & the journey the shaman takes into the other worlds. Unique one of a kind, OOAK, hand crafted by artist & Wicca wandmaker Tree Pruitt is currently available. 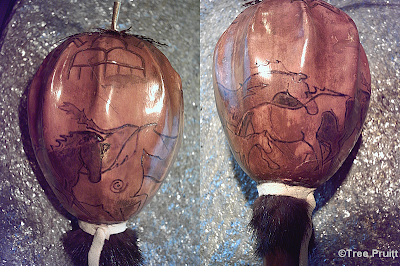 Designed to resemble an ancient relic that can be used in modern times. This rattle could also be used as a Wiccan wand, to direct energy during spell work or ritual. The neutral color scheme easily allows for strands of colored beads or charms to be tied on for a personal touch. 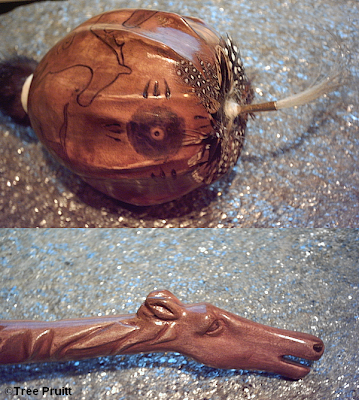 The rattle head has images of a running herd of horses, drawn in a primitive cave drawing style, with spirals, hand prints, clouds, lightning bolts, the sun & the sacred Directions; North, South, East, West. The mellow toned sound is created by shaking the rattle either downward for a bold sound or upright for a softer tone, caused by various natural materials inside. The rattle head is filled with a combination of the following items chosen for best sound properties & metaphysical energy... gem stone fragments, hardened clay balls, beach pebbles, lentil, ceramic beads. 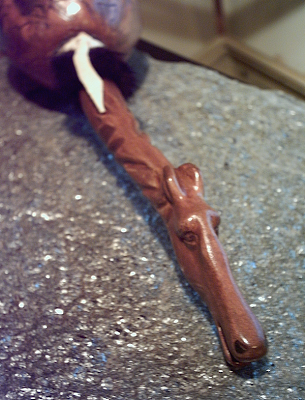 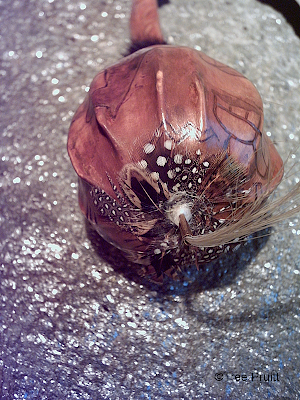 This was a very enjoyable project that wasn't rushed at all. Once its sold it's gone, and I'll miss its presence, but I'll be very happy for this rattle to find a loving home!

My enthusiasm has gotten the better of me, so I must tell you about a wand I'm near to finishing! This wand is designed especially for use in Wicca magic and rituals. Even though my old camera will catch better images in the daylight, I've included some snap shots here. Made of weeping willow wood, it features a hand carved Mother Earth Goddess and pyrography burned symbols. I had a hard time holding back from the fun of adding detail to the human like figure so that the stick didn't become too fragile in the center; it's still as strong as willow can be! The natural under-bark is still in place in areas and some spots have indents that strongly remind one of certain female anatomy that is sacred -- indeed vital -- to birth, and I've accentuated those to emphasize the importance of the natural Yoni like symbols.

There's a lovely light catching quartz crystal shard at the top, but I chose to end the tip of the wand with a spiral rather than a stone. I think the spiral is one of the most important of the Wiccan religious mysteries. The spiral of life is where we often find ourselves in the same places we were in the past, but on a different and hopefully more progressed level or layer of the spiral. Bettering one's self for the benefit of all should be the goal of every Wiccan; this is selfishness through selflessness, (helping others helps yourself in the long run).

On the wand, Wicca mysteries are further alluded to by more symbolism. The tangle of hair the Goddess sports represents the web of life. The open carved space in the middle of the hair is the Center of all being where energy is waiting to be fulfilled to being. The handle portion of the wand holds simple line glyphs for the Elements of Earth, Air, Fire, Water, and Spirit; indeed ALL of the Elements were involved in crafting the wand. The reverse side has words the symbols stand for burned into the wood too. At the foot of the Goddess is the double crescent and circle symbol that most commonly represents Her in the Triple Goddess aspects of Maiden, Mother, and Crone.

Don't think, however, that only the feminine divine is expressed here. The circle and crescent symbol of the God, often thought of as the Horned God, is directly balanced in opposite to the Goddess sign on the reverse. Wicca can often seem very Goddess centered, but because of the theory of Force and Form the God is always present even if not as visually represented as His female counterpart. The complexity of Force and Form can be summed up as the God provides the force, or driving energy, of the universe and it is the Goddess who gives it form and shape. In this wand the God is present through the sun's energy that allowed the willow tree to grow, the strength in my muscles as I carved the wood, and even the power of change that was required to make the metal hand tools I used. Though the Goddess features most prominently on this wand, I feel there is a good balance between all of the most important Wiccan symbolism.
There's little that's left to do before this 13" wand is offered for sale. I still need to buff on a finish of carnauba wax for a natural muted shine. I like using varathane because it's such a durable finish, but I think that would be too shiny for this wand. The hand rubbed finish will still be water resistant but will also have a lovely tone and feel. After the finish is applied I need to do the "core". This wand will have a magickal core which will work in a similar fashion to a totem animal medicine bag; No whimsical dragon scales or firebird feathers though! I have a very special bit of naturally shed elk fur that I'm considering placing inside the small hole I've burrowed into the handle of the wand. I'll likely consider appropriateness of the metaphysical energy of several other materials too before capping the hole closed with a tiny gem stone, sealing the core inside. It doesn't require much of any given thing to add to the magic because it's simply the blessing of the energy involved that counts. I'm always careful not to use anything dangerous, illegal, or unethical in a magical core -- that would defeat the purpose -- but I won't make final decisions until the action of "doing" is in hand. This is without a doubt the most elaborate wand I've ever crafted! I'm sorry the fun of the project is nearly over, so you can bet that I'm already contemplating another.


*This is another instance where my art blog and my metaphysical paranormal blog overlap, so this entry will also be found at "On My Easel".