The subject of Bigfoot returned to my attention when a television program surfaced memories of my personal experiences. I was thrilled to see the scientific examination of Bigfoot by National Geographic channel's new American Paranormal television program specials. With much of the same information shown by other programs in the past, this presentation was the most complete look at the Patterson-Gimlin film I've seen. The crucial anatomical evidence was so deeply examined that I don't see how it could ever get any better without having an actual specimen to dissect! This single bit of film is the main reason that I personally am convinced Sasquatch is real because since I was a child I could see the non-human anatomy that simply can't be faked. I breathed a sigh of relief when the National Geographic program addressed the muscle structure in depth, the now well acknowledged breasts of the creature, and especially the bone structure of the leg; showing us just how that big 'ol femur probably looks in reality.

With an artists eye, I've always liked to look into bodies with a sort of x-ray vision. A bone or muscle is going to move or reflect light in a predictable manner every time, unless there is a physical deformation to the body. By careful study of the bones of an animal, an artist can shift or create nearly any realistic pose without needing to directly copy an image. Some artists can learn to see in this way, knowing what the bones look like under the soft tissue of even people they engage in casual conversation. However, in the Patterson film there's no need for an expert eye to see the strong Mountain Gorilla like features to the body of the creature; I simply can't understand how anyone can think this is a man in a suit! I challenge anyone to present me with scientific evidence that it IS a dressed up guy... really. In my opinion American Paranormal got under the skin of Bigfoot better than anyone has before and I applaud National Geographic for finally jumping on board the paranormal train!


When I'd moved to the Pacific Northwest years ago I did still have a few doubtful questions about Sasquatch. Now I live in Indiana, but the experiences I had when living in the Washington State rainforest region made me a firm believer in Bigfoot. First, the people I spoke with were very level headed individuals not prone to flights of fancy. A seasoned hunter will tell about a Bigfoot sighting in the same camber and tone as an elk hunt; it's simply another animal potentially on the trail. I next questioned why Bigfoot isn't sighted more often or remains found. I'll turn again to elk as an example when, during hunting season, I noted small herds of female Roosevelt elk grouping together near rural areas -- right in the brush behind the homes of avid hunters! There I was playing Dian Fossey to the elk with my notebooks and sketches while any one of those hunters would gladly have taken a shot if they'd known the animals were near!

I studied the movements (in all forms of the word) of the elk in and out of one small area for three years and each hunting season the females grouped together in this way hidden under the human noses. Thus, it's reasonable to conclude that other large animals go without notice as well. As a matter of fact, I received evidence of that when I came face to face with a grizzly bear just a few short yards from the local police station and grocery store one day. I inquired and interviewed people who regularly drive right past the spot I'd been with the bear, and though many reported seeing something near the water they disregarded the sight as a dog or rotting log because -- just like the hunters and their back yards -- they weren't really looking.

It's said that if you go looking for something you will indeed find it. One day while looking for the elk group I was observing I found more than I'd expected. I was in the tree lined field at the right time but my elk were no where to be found, nor could I find fresh tracks or droppings. The scrub along that particular area of Grays Harbor was broken up into near "rooms" of open field closed off by young trees of various ages with few areas of older trees, so I decided to move into another room to look for signs of the elk. The closer I got to the larger tree line portion the stronger a terrible smell became noticeable. There was a combination of Skunk Cabbage, sour milk and rotted meat to the stink; If you've not had the pleasure of smelling ripe Skunk Cabbage you can guess how it got the name. 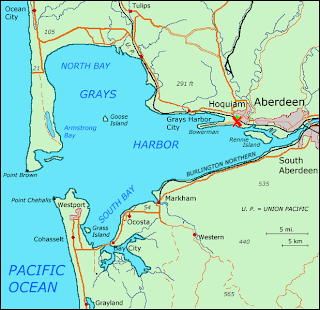 I was reminded of smelling the close-up breathe of a cheetah I used to feed at a zoo, so became cautious in case there was a wild cat species or a bear nearby. The closer I moved the more convinced I was that I must be smelling bear because the scent was all over in the air and seemed far too "big" for a cat. Then I noticed tree limb debris on the ground and since cats don't do that I was sure there must have been a bear nearby recently. I began to back out of the area cautiously and that's when I noticed the upper branches of several trees were obviously twisted off. I thought this was curious so mentally took note of the height -- those branches were far too high to have been broken off by even a very large grizzly bear. My mind began to click as I looked around at the odd scene with fresh eyes.

From the left and the right high branches were twist broken and lain on the ground. I knew I'd seen something similar before but couldn't place it in my mind at first. They weren't scattered as if something had fallen from the tree, but were placed over-lapping and had many smaller branches over top. Curiosity got the better of me so I moved back in for a closer look. The smell from the pile of branches was nearly too much to take! I examined the surface of the trees and couldn't find a single claw mark. The lowest branches were too thick and high for a human to have broken, so I wondered at what could have reached them to twist at all?!

I stood in between the broke branch trees, like a hammock, in an effort to re-enact what happened -- a little CSI, if you please. On the left side tree a branch had been broken then lain on the ground because it was on the bottom of the debris. The right hand side tree had a missing branch that matched the next layer of the debris pile. Bears do not criss-cross branches in layers! The almost woven matted look brought to mind nests made by Mountain Gorillas. It certainly seemed as if I were looking at the bedding of a large primate. OK, I thought, that can only mean one thing because there were definitely not going to be gorillas in the Washington mist! My next thought was of possible hair or feces remains so I moved down to my hands and knees for the closest possible look. Suddenly the brush on the other side of the small clearing moved! The stink I'd thought was so overwhelming quickly became so strong that my eyes began to water. A tiny bit of panic set in as I realized the source of the smell had just moved closer! I stood up and the brush moved again. Deciding it was time to get smart -- afterall I was alone in the woods armed with only a knife for collecting plant specimens -- I slowly backed out of the area and headed home quite excited.

The next day I returned to the area with my husband. The branches had been scattered about more than they were the previous day and the smell was faded. There was no way he could deny the height of where the branches had been broken off of the trees was impressive. My husband is a rather tall man with quite a personal "wing span" and on his tip of toe could not reach near the breaks to measure. He concluded that whatever broke the branches had to be over 8' tall or had really long arms. He too could find no evidence of claw marks and announced the whole thing a mystery. I don't think it would be a mystery if he'd have seen that under brush move the way I did, but I respect his need for personal evidence. Something odd had occurred under those trees and something drove away the elk, which did not return for four days after the stink had faded away. I consider this to be my first Bigfoot encounter -- the others shall have to wait to be told another day. I have no doubt that Sasquatch is a real biological animal.