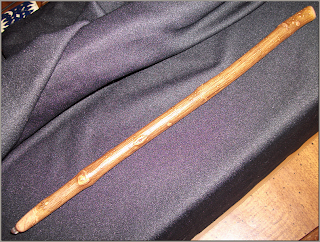 Named the Phoenix Medicine Wand this compact 10 3/4" x 1/2" ash wood stick features a magical core of ingredients similar to a those found in medicine bags and bundles, as well as other unique aspects. The size and feel of this wand is sturdy; not that it's unbreakable, but it could handle being stuffed into a Harry Potter style pocket for magic on the go.

The wood itself is a specially gathered White Ash (more info). One of the many magical uses for Ash Wood is for working with or warding away lightning, associated with the Phoenix or Thunderbird. The tip is capped with a fine miniature clear quartz crystal point from the American Southwest, set clean and firmly into place. The smoothed back layers of tree bark near the tip create a pattern reminiscent of a red feather, though the overall color is more brown than seen in the photographs. On this end of the wand a gently smoothed knot revealed a natural sacred spiral design in the bark and others similar to eyes or Yoni symbols. The Yoni like marks were created from the claws of fire red Cardinal birds having perched on the living branch, and the tree healed itself.

The pommel end contains the core. Within the natural stem cavity metaphysical ingredients have been placed to attract energy similar to the legendary Phoenix or Thunderbird. The materials include: Red Pheasant feather, a bit of Brown Bear hide, a bit of Red Fox fur, Mugwort herb, White Sage, Rosemary. This core was then sealed with natural paper clay, and the entire wand was lightly coated with a protective gloss varnish.