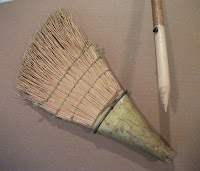 Sigh, I either need to get a new utility broom or leave the yard work to take up vampire hunting as a hobby... see the photo. My old Indian Brand straw broom has had what may be a fatal incident at last. I loved this broom because it's been super tough and maintained beloved garden paths over many years. Sadly, I can't find another of the same brand. It must be time to move on and say goodbye to an old pal!
It may be obvious that a broom would be an important tool to a witch but some of the ways in which it's magically used might not be so obvious. Leaving flying to the wayside, consider three general categories for brooms... ritual ceremony, kitchen use, and utility or yard work. A broom used for cleansing energy from a sacred space or magick circle shouldn't be the same one used to clean up spilt coffee grounds on the kitchen floor but a witch, or spiritual minded person, can create magic in the moment through awareness of the sacred act of maintaining ones living space via chant, spell, or affirmation while sweeping. A kitchen broom should never be moved from one home to another as it's thought to retain the dirt and negative energy from the old place to the new, thus giving bad luck. I always make a clean sweep after moving by buying a new kitchen broom, but I don't use the same one for outdoor chores.

A utility broom gets used for sweeping sidewalk leaves, grass clippings, clearing eaves of spider webs, and other things like cleaning the porch. I think this is a different kind of "dirt" than the sort created indoors, and that natural debris doesn't accumulate negative energy like household corners can. When I'm cleaning with the utility broom it's still a sort of ritual act of magic because I know that I am creating an inviting space for us humans plus the non-human inhabitants of the yard.

Inwardly, and sometimes aloud, I speak to the Little People, Brownies, Pixies, or Fairy Folk that might be sharing our yard and invite them in with good will. Keeping porches and garden paths clear makes it easier for them to move into your space, and they will be attracted to a property that is loved. Utility and kitchen brooms are an important part of everyday magic just as a ritual broom works for our special magic spaces. At all times, with any broom, a person sweeping can use that broom to clear away negative energy; The intent will travel through the tool. and everyday actions can hold magic.


Blogging this today has helped me mourn the loss of my old broom, so I'm off to search for a replacement and glad for the opportunity to encounter something new.