The Thing In The Crawl Space

This Halloween season calls my mind to conjure up some ghostly memories. My childhood home was a very busy place with lots of comings and goings, but not all of the visitors were living. My parents had the place built so Mom was fond of saying that a new home can't be haunted; Many of our living guests would disagree with that statement after having gone into the basement or slept in a certain room upstairs. In fact, we shared the space with various types of haunting over the years.

The basement held different paranormal type treasures to enjoy growing up with, including "the thing under the basement". We had an odd raised portion along one wall that was like a pit filled with gravel for drainage -- technically it was a cut-out in the basement wall. Since it stayed dry, the family stored things back there. It was a narrow difficult space with a few spiders every now and then but lit with no particular reason to feel creepy... but it sure did! Several people reported seeing a black shape moving around in there, and few of us ever crawled into that area readily. Mom said, "If you don't look at it then you won't see it." I did my best to ignore all of the strange things in the house, but one day I did have an encounter with that "thing under the basement".
﻿


Mom had asked me to get something from that crawl space that was important to her. Wanting to be a good helper I ventured down the top few stairs and waited a moment. There was no scary feeling so I got on with the task. For a child to get into the space something would have to be climbed, so I hoisted myself quickly onto the top of the clothes dryer to the top of the cement wall under the basement. I'd seen the item I'd come for right away, so I scurried into the gravel quickly. The item was jammed under the corner of a box. I managed to raised the box and shift it aside. There, behind the box, sat a black creature with glowing red eyes! I jumped back, pointing at it in fear. I shouted, "No, no, NO!", with the last one sounding more as if I were scolding a bad dog. The thing jumped backwards too as if it had been struck!


With an outline akin to the Hunchback of Notre-Dame it huddled into a far back corner of the crawl space. Mom called out, asking if I was alright. I grabbed what I'd come for and got out of there fast! I was pale faced and sweating as I bolted past my mother. She grabbed me and calmed me down. When I told her what I'd seen she hugged me tight and grumbled about my older sisters having let me watch scary movies. Mom always thought I had a vivid imagination. Whether Mom believed me that day or not, it was thankfully a long time before she asked me to go into the basement again. The glowing red eyes haunted my memory.

The years passed, and I learned to deal with the things I'd see. Living in the house was spooky, scary as heck at times, but never paranormally dangerous. As long as I can remember I've seen people and heard things that others didn't seem to see or hear. During a hospital stay when I was about seven or eight years old I discovered that some of those things were people who had already died rather than my active imagination at work. When I grew up I went back into that crawl space of my old home looking for "the thing under the basement" with my spiritual wards at the ready. I found it right away.

I calmly sat in the gravel facing it. We'd had other less direct encounters throughout my childhood, so by then the thing knew that I could see it. Raising up it's arched back the thing glared those damned red eyes! The gesture was very scary, but after it didn't move forward and I didn't back down, the thing huddled into the far back corner seemingly afraid... of me! I told it that I think I scared it that day when I yelled "no" at it and I was very sorry if I projected energy when I had pointed. I let it know that I didn't mean to harm it then nor did I intend to now. It pulled it's leg shapes in tighter seeming to mewl like a child or a frightened puppy. I'm not stating that this thing is totally harmless but I don't think it ever wanted anything but for us to stay away from it all those years. 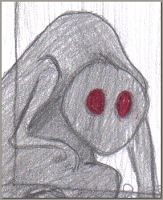 I reached out my energy towards it with empathy, and we made a communication connection. Quick words and short phrases began to echo inside my mind. It couldn't talk like a human spirit or ghost. I wondered, so I asked aloud, "Were you ever a human?" It turned to claw at the cement wall behind it as if in panic. Then it turned back to look directly at me again. I began to feel like I was in the dirt, like having been buried alive but not frightened... it was like I was OF the dirt! Images of a woman ghost I'd previously seen on an adjacent property showed in my mind, then flashed to the soil again, then to the woman, and then to a shadow man that also dwells inside the house. I had a revelation that the "thing" was very afraid of the shadow man!

I asked,"What are you?" It only looked away. I probed the things energy... no, not like any Elemental spirit I'd ever encountered before yet similar. There was something familiar about that energy. That's it... a Familiar, though this was no cuddly black cat crouched before me! There's no way to be certain, but I feel that the "thing" was created by the woman ghost when she was living. Out of a need for companionship, either intentionally or unintentionally, out of her love for the soil beneath her feet she had created a Familiar Spirit. The thing looked back at me then and it's eyes were shaped more like a house cat. The hump on its back lowered, and though it seemed more calm than before it rubbed small hand shapes together as if nervous. I got the feeling that the shadow man wouldn't let the thing leave -- it felt trapped. I felt so sorry for it because it was once a magical thing intended to be a sort-of friend but was now huddled in a corner like an abused pet. This was not a scary evil thing. It was lost without a reason for being.

Eventually I crawled down from the space leaving the thing alone. I'd basically told it that as long as it had good intentions we could exist together, that it was free to come and go as it pleased. I knew that the shadow man was very negative, but this thing was not. I let it know that the shadow has no power over it. I told it that it was free to return to the Earth if it chose to do so, or it could stay to protect the living from the shadow. Now when I think about the thing rather than having spooky feelings I send out positive love to it and the Earth. It certainly did me some good to face my fear of the unknown with a little kindness and perhaps some understanding.