Oh what a beautiful morning! The day had an unusual start, which could have turned things sour, but instead opened to a blossoming flower... and yes, unfortunately for my spouse I do talk that way in real life. So today, which was supposed to be a day off, my husband was suddenly called in to cover for a co-worker which left me with the task of taking the dog for his wake-up walk. I honestly wasn't looking forward to it because for the past few days, despite having eaten well and taken vitamin boosters, my physical energy has felt drained. This walk is something that "the guys" always do together, so I let lil' Sparky lead the way.
In short time we found ourselves facing a vast expanse of grass -- a sea of green for an urban area -- where many years ago three Victorian homes had once stood tall. I've not been to "The Field" at that time of day before so was surprised at the number of animals picking and grazing together out in the open. My dog seemed a bit surprised too because he stopped to stare across the street at the field and then look up at me as if to say, "wow". We moved slowly down the sidewalk so as to not startle any of the ravens, chipmunks, squirrels, and groundhog.

I don't often get to observe the ravens being so relaxed. A couple of years ago this murder of raven moved in and had such a battle with the crows that had been here that it caught the attention of local media for a time, so these ravens are usually on guard. Today though a number of them were casually enjoying the bounty of old corn cobs that someone had tossed over there after a grill-out. The one that was obviously the sentinel for the group walked with us on his side of the road for a few paces, feeling us out for possible danger. I closed my eyes, nodded, and did my best to send out the energy of appreciation. I think it's important not to just send a big ol' metaphysical blast of LOVE at creatures because the sensation can be misinterpreted; Doesn't a cat when it's hunting just LOVE a juicy birdie? You get my point, and so did the raven because it returned to stand back with the others. So much smaller than the Pacific ravens I knew many years ago when I lived on the Olympic Peninsula in Washington State -- only a third of the size -- but still large gleaming black beauties!
Sparky and I crossed the street further down so as to offer the least disturbance to those who were feeding. We do have a slight history with the squirrels -- a bad chasing habit -- so they took off in a run before our feet even hit the grass. I expected the ravens to erupt into a cloud of caws and wings, but the sentinel only gave us a haughty upward nod as if to say, "HUMPF! Do you think we're a bunch of simple CROWS?" They continued to feed and playfully toss corncobs at each other while we moved to the taller grass at the back of the field.
Sparky did his business then began to casually chew some of the tender grass sprouts, so I decided to plop to the ground for a while. Clear from the shade of any nearby trees, the Earth felt warm and happy underneath my bottom. I soaked up the Sun from above and felt the sleepiness of waking washing away from me much better than I had from the still half consumed first cup of coffee waiting at home. Everything was so peaceful that gradually the squirrels began to creep back down from the trees to return to their claim of the corn. One of the ravens tossed a cob far into the air so that it landed away from the group, as if to keep the hyper squirrels at bay. Sparky sat down next to me in the soft mown grass, and for a while we stared off together at nothing; It was glorious!

Eventually the dogs shaking body brought me out of what felt like a trance and I realized that not only was he panting but I was slowly becoming covered in sweat. We'd sat there for so long that the light had shifted and the heat of Mid-day was starting to catch us with full force! Getting up to move into the shade of a large old mulberry tree offered us relief, but again did not stir the nearby ravens. I knew this bunch as being watchful and distrusting, so I felt it a great honor that our presence was accepted with such silence! Wandering under the shade I allowed my canine partner to sniff at will while our corvid companions began to creep closer. The birds moved in so very near to us that I'm sure to passersby on the street they all must have all looked like leashed pets! I clicked softly and the sentinel bobbed its head while clicking softly in response. I have to admit that I was feeling a bit like Snow White at that moment with my animal friends surrounding me so. Inwardly, I felt the rhythm of The Seven Goddess Chant stirring... Isis, Astarte, Diana, Hecate, Demeter, Kali, Inanna. For quite some time all of us creatures in the field wandered together in a slow wave of the start of a hot Summer day.
Gradually the feel of the energy began to shift. I noticed that the sentinel was facing a different direction while holding its head alert. Without breaking any of the calm two pairs of silent wings lofted to a perch high above the field -- the look-out post. I smiled because it certainly felt as if my feathered friends were also looking over me, and I knew from past raven observations that two scouts are always sent to confirm a possible danger. I was enjoying the opportunity to watch the same types of behaviors from ravens that were thousands of miles apart from those I'd observed before yet exactly the same in kind. I was not disappointed by the next set of actions.

From the tree tops the sentinel bird began to caw loudly in a staccato pattern. The second scout bird returned to the ground while flapping its wings making great noise. The sentinel too flew off with a large amount of flapping noise but moved away in a direction the rest of the group would likely soon follow. Now the scout on the ground issued forth a series of caws that was very strange -- a broken staccato with particular pauses that was similar to one long stuttered caw; Odd, yet the pattern seemed familiar. I swiftly searched my mental files, but before I could place what that call might mean the sound changed for a moment to one that I knew for certain... people are coming. Sure enough just a few seconds later I heard voices from the railroad tracks off to one side of the field. Corvid communication confirmed.
I smiled while still wondering the meaning of the strange call that the raven had returned to with added gusto. In a flash of black diamonds all of the birds took flight into the sunlight at once, following after the sentinel as I'd suspected. Then I heard an engine with metallic clanking sounds approach, and from behind the tree line I saw a truck on the railroad tracks! It was noisy and unusual, so certainly worthy of the caution the ravens had shown, but now I remembered the meaning of the call! I've always had the habit of walking near railroad tracks, and back when I lived in the Pacific Northwest a similar type of truck would often drive along to police the tracks for debris; it's a pick-up with rail wheels added to the sides. I'd not seen one here before, and indeed had not seen one at all in many years. These raven here in Indiana gave the same type of alert call as did those back in Washington State when this type of vehicle would approach! Language use among animals is not unknown, and not just in dolphin... even regional dialects of some bird species are actively being studied these days, but to experience the communication so clearly was a true joy! The raven here have never given me an opportunity to observe them so closely, and I can't help but feel as if we made friends. I can't state exactly what that call means to the raven, but if I hear it again I'll bet anyone standing near me a cool twenty bucks that the truck will be coming!

I left the field today with my coffee cup still in mind but also with a much greater sense of connection to the ground under my feet and the larger world around me. I'm not ready to adopt the morning walk into my personal routine, but I sure was glad for its addition today. I totally enjoyed chillin' with those cordial corvids! Now I'm home and typing this with my loyal coffee cup beside me and dog at my feet. New-Age music is playing while tendrils of incense smoke waft through the conditioned air. Perhaps when the day grows late, and the ravens take up their evening post in the tree tops outside my home, I'll step outside to say hello to my feathered neighbors. 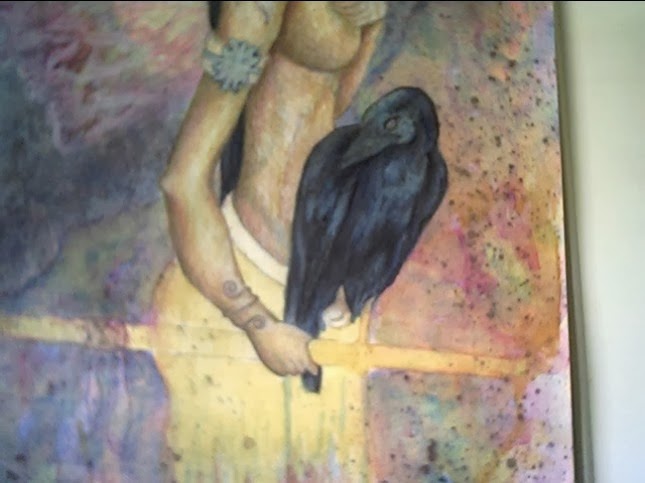 May your days too be filled with many little blessings!
-- Tree