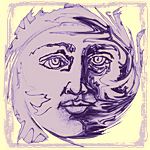 Witch Whats presents a spacey side offering the current moon phase plus solar and geomagnetic activity updates, plus access to a Moon calculator to help plan Pagan ceremonial magick and Wicca ritual activity in the future.

Follow the Moon, she says with a smile. Look to the sky and linger a while!

Plan ahead for spells, ceremonies, and rituals with this Moon Calendar
~ 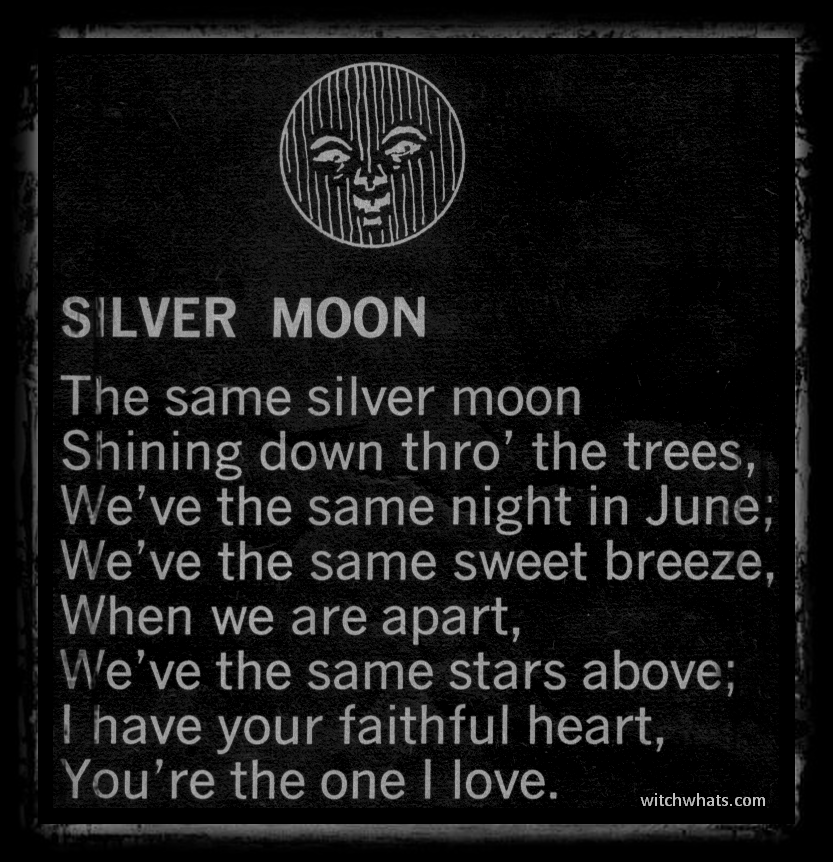 I created this simple little Moon related graphic image from old vintage music papers, and I invite you to use it for free if you feel the need. You may also adapt the images as you see fit... as far as I can tell the image and words are clip art copyright free. Click the image to enlarge and then share as you please.

Email ThisBlogThis!Share to TwitterShare to FacebookShare to Pinterest
Labels: about, Nature & Animals, Wisdom 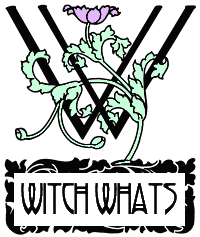 Witch Whats is brought to you by artist Tree Pruitt, and she can be contacted either through the Witch Whats Facebook page or directly through email at artist.tree@gmail.com

Remarks and/or questions about a specific post/page on this site should be posed on the individual post in "Comments" for the best benefit of all.

Email ThisBlogThis!Share to TwitterShare to FacebookShare to Pinterest
Labels: about

My mind is in knots today. No, I'm not confused, but am contemplating knot or cord magick. Knots can be a powerful resource to use for magick and have probably been in use since humans first gained the ability to tie a blade of grass. The turn-of-phrase to have one's "mind in knots" hearkens to the later use of knots as a spell devise to cause confusion to another person or send them the "Evil Eye", though knots are useful in nearly all types of spells. Throughout the centuries people have used knots to help fulfill all variety of magickal needs and we today can also utilize this powerful tool.

But how does one go about incorporating knot magick into a personal spell? If you're not already familiar with the basics of spellworking it would be advisable to first consult some of the many books available on the subject before trying your hand at knot magick. Though it's not vital, it is fun and magickally helpful to use color correspondences that match your goal or need as well as choosing a material with properties that match with what you want to achieve.


The graphic included with this post illustrates a variation of the chant written by Silver RavenWolf along with the positions in which knots should be tied on your cord or string (click image to enlarge). The entire chant can be used in a spell, but I've personally had success with tying only a certain number for certain needs such as three knots along with chanting "By knot of three, so mote it be" in spellwork, especially where the number has important correspondences to the overall goal of the spell. In such cases I'll often store the cord in a spell box to be removed on the nights of the next three Full Moon if three knots were tied and repeat the numeric chanting while visualizing my goal. You can use any of the individual number chants with knots to fit your needs.
~

Here's something to try... conjure up your own Pagan prayer cord! Prayer cords can be used for general prayer, meditation, or with the focused intent of chanting words to a spell at each knot. The number of knots you tie depends upon the purpose of your cord, but for general mediation and prayer I personally tie thirteen.
Buy or find a special strand of leather, ribbon, or pretty plump satin cord to use. Most decorative satin cording is somewhat thick, so you'll need 48" to tie thirteen knots 2" apart. The first and last knots should be 2" from the ends. When your cord is finished it can be kept by the bed side, stored in a spell box, or even carried in a bag.
~

There are probably as many dreamcatchers as there are dreams theses days. While browsing online I noticed that in photographs of dreamcatchers sections of the webbing area are tied together as in macrame rather than looped as in weaving. It caught my eye because I was taught that knots should not be used to weave a dreamcatcher web lest the knot trap a spirit and bind it or an unwanted dream to the sleeper. Instead of tying the weaving it should be looped over itself. Looping holds the web together by natural tension; After all, a dreamcatcher is supposed to represent a spider web, and spiders don't tie knots. The issued tied up my attention, so I thought that this would be an appropriate place to share my view. Whether or not you choose to knot may simply be a matter of personal preference.
~

Thank you for taking the time to read my notes on knots. I hope you enjoyed yourself and found some helpful information. Click the link to my store to check the availability of handmade dreamcatchers and other ritual tools that I've made.
Brightest of blessings to you!
~~ Tree

I've created a special Pagan word search puzzle game especially to celebrate the holiday. Join the Ostara hunt to find words that relate to the meaning and symbolism of this Wiccan Sabbat. The answer key can be found below the puzzle. Brightest of blessing and enjoy!